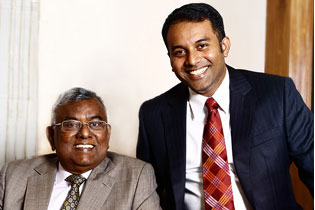 Mrs. Valsa Cherian is the proprietor of B&H Exports. She has been an active member of Young Women’s Christian Association (YWCA), Chennai for more than 20 years. She has served in several of its committees, taken up responsibilities and championed fundraisers over the years. She played a key role in initiating the founding of YWCA Community College.

Her husband, Mr. Benjamin Cherian, is a chartered accountant and Harvard University Diploma holder. He is the founding director of Raj Hair International of which, B&H Exports is a sister concern. In 2001, his son Mr. George B Cherian joined the business after completing his masters in International Business from Monash University, Melbourne.

“We as a team strive every day to ensure that only the best is hand-picked for you. We have a reputation for being the best virgin Indian human hair exporters and we uphold that with integrity. “